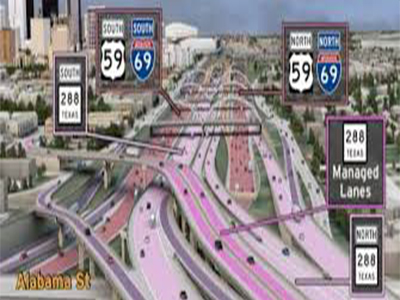 The North Houston Highway Improvement Project (NHHIP) Segment 3 will include the rerouting of I-45 in the downtown area to be coincident with I-10 on the north side of downtown and coincident with US 59/I-69 on the east side of downtown. The existing elevated I-45 roadway along the west and south sides of downtown will be removed. Access to the west side of downtown will be provided via “Downtown Connectors” that would allow access to and from various downtown streets. Both I-10 and US 59/I-69 within the proposed project area will be realigned to eliminate the current roadway curvature, and four elevated I-10 express lanes will be added between I-45 and US 59/I-69. The proposed project includes reconstruction of main lanes, frontage roads, and the addition of bicycle/pedestrian features along frontage roads. The project will create additional roadway capacity to manage congestion, enhance safety, improve mobility and operational efficiency. Vivek acted as the Geotechnical EOR on the following segments:

Project consisted of several MSE walls, drilled pier walls, embankments and bridges. A total of approximately 17,000 feet of drilling was performed with boring depths ranging from 40- to 125-feet below ground surface (bgs).